Up to No Good

The party had survived countless attacks and intrigues, and even wrested a powerful blademaster and mercenary from their respective nests, but now the Dark Lady of Spiders has demanded something else.

She was aware of the existence of something special in Phlan.  She had seen one of them, once before, twisted for a new and darker purpose.  Now, in the rise of something unexpected, she wanted them all.

The fabulous Baneblades of Demron, suitably twisted to her purpose, would be a powerful force for her people—and she had just created the perfect lure.  Meanwhile, the City of Phlan was already wreathed in flame. 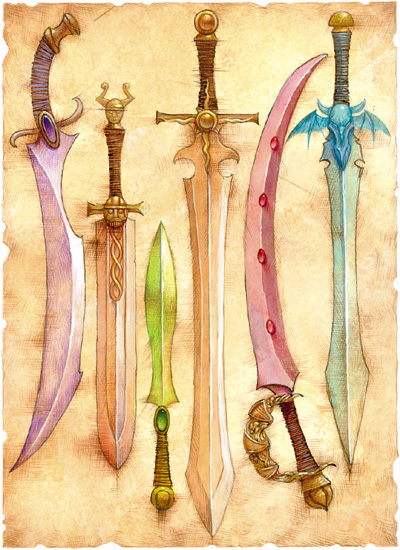 
Evaelathil
A green-glowing blade, usable only by halflings
Mhaorathil
An orange-glowing short sword, only usable by dwarves
Morvian
A greatsword that glows with a yellow sun-like light, intended to be used by humans
Faervian
A longsword that glows deep purple
Dragathil
A medium-sized rapier that glows red and can hold people in place
Keryvian
A broadsword wielded by Fflar Starbrow Melruth