Juchin tore off after Porphyrus Cadorna like his boots were on fire, and his hired fire giants throwing boulders from the wreckage of the Slums only made the fight more surreal.  Days later, Juchin returns empty-handed, having exhausted himself in the woods chasing a man who seems to have vanished into thin air.

The Thieves Guild of Phlan, calling itself the Welcomers, operate with impunity in the New Settlement, and have agreements with the surrounding inhabitants of the Slums to pass unrestricted through the Old City.

Fizzl's task will be to uncover a means of entry into the guild, whose members cut off their left ear to identify themselves among their fellows.  It won't be easy to get in.  Once inside, it may be impossible to leave.

Grygrandir sleeps, and the party waits.

Meanwhile, the Companion is named to the Leading Council of Phlan, and the castle begins to take shape under new leadership.  Backed by the dragon, no one will challenge them… but when the dragon seems to go missing, will that change?

Thinking About the Future

The dragon was grateful to be spared, and shared a portion of its horde, but also agreed to stay, guarding the remainder of the horde it has buried under its lair at the heart of the castle.  It has in the meantime countered that the poisoned hedge row remain, to prevent others from looting its horde.

Goblin and orc survivors still rest hidden in the slums, but offer no resistance.  They no longer have a force capable of fighting the whole strength of the settlement of New Phlan.

Councilor Cadorna attempted to wrest control of Castle Valjevo, but it was short-lived.  Juchin had already discovered Cadorna's intent, and found the deed to Valjevo laying in a secret horde below the keep, in an escape tunnel reserved for the former lords of the castle before their deaths many hundreds of years ago.

Worse, the Priest of Tyr the company had hired charged that the writ granted "holy authority" to the new owners of Castle Valjevo, and took charge of the fifteen men Cadorna had brought to take the castle in the first place!

Bolstered, they went to address the castle's remaining original occupiers, the fire giants.  The leader, a man named Gor, had a booming voice and a signed contract to defend his run for the master of Valjevo.  Juchin promptly paid them to maintain their contract, which will now include rebuilding the castle's defenses.

Meanwhile, the remainder of the party travels to Mendor's Library, amid rumors that even more riches lay hidden, some historical, some magical.  Mendor was, after all, a powerful mage… I wish I could say that things were better, but the truth is, people still seem to thing that I am trouble, or a half of something called a Ling. I know that there is not a ling, but being called half makes me think that they think I'm a kid, or maybe that I'm less important than the bigger people.

I'm hoping that it all passes and that someone other than 3Acasia thinks I'm worth the while, because I really am only trying to help. Valista, the tie-thing, really, really doesn't like me. I mean, it might be because when she was fighting the mirror person… I kind of hoped the mirror person won because I was pretty sure that it would be better for everyone… but it's not like I attacked her.

I should tell you about the dragon though, he is AWESOME! He knows what I am and that I'm from Krynn!  He even knew the Flann thing! I don't think I've ever been so happy to meet someone before! King Juchin made friends with him though and I think Grrl will make a fantastic new friend and help us clear out the keep and protect the people of Flann (which is not a dessert)!

OH! AND I GOT A CROWN! IT'S REALLY PRETTY AND FITS RIGHT OVER MY TOPKNOT!

The Secret at the Center of the Maze

The possessed dragon was defeated at great cost.  The vast majority of a hired army died to a single breath weapon, but it gave Juchin enough time to plunge his polearm into the dragon's chest, and Fizzl an equal measure of time to enter the dragon's horde, and find the Orb of Dragonkind that had been used to control it.

Smashing the Orc nearly killed the dragon, but freed it, and it halted its assault and assured them it was "defeated."  Convinced to remain under a banner of truce and heal their remaining sick, the dragon shared a portion of its vast horde, collected from around the castle over nearly three hundred years.

Now the party turns its attentions toward the Council of Phlan, and the likely need to correct several ancient texts, that identify the Cadorna family as the rightful successors of Valjevo—when in fact the keep belongs to another.

Gargoyles provide guardianship over the deeps, but they also sealed away a secret, a horde of beholder-kin called Death's Kiss.  There were only a few, but having nothing else to do, they turned to breeding, and hibernating, until stirred from their slumber by the party's arrival. The beholder-kin left many things in its horde.

The quest to recover the Baneblades of Demron begins in Phlan with the recovery of the Sunblade. 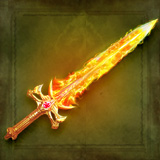 On the Road to Valhingen Graveyard

The undead that marched from the graveyard arrived at the party's camp shortly before morning, and attacked with full force.  Two of them appeared to have been imbued with spell ability, and with magic missile and stinking cloud did considerable damage to an otherwise well-invested coterie of fighters, backed by experienced healers.

Through a hidden magical door, the party heard a conversation between "the Boss," a terrifyingly powerful mage, and his army of orcs, twenty of which he killed with a single spell.  Confronted with the extreme power of the mage, the party has opted to withdraw, and head to the place "Boss Traxus" is trying to invade, Valhingen Graveyard.

Resting place for the royals, architects, then later the soldiers and finally lay citizenry until the fall of Phlan, the graveyard is home to a powerful undead that apparently does not agree with Traxus' bid for authority in Valjevo Castle.  The party intends to beat him there, using charmed orcs to clear the graveyard, and find what the Boss is looking for.